Wow, I feel like so much has happened in the past few weeks I don’t even know where to start!

I got back from an amazing holiday in New York on Tuesday rather dog-eared and tired but happy nonetheless. I’ve been to America before to the South so New York was an entirely different experience. I loved it, most of it! I found that the city moved with a pace beyond belief and it was so hard to keep up with everything and everyone there. We did all the tourist things you would expect like visiting the Statue of Liberty, the Empire State Building, Top of the Rock and Central Park. We ate lots of amazing food, went to see Wicked (which is amazing by the way!) and celebrated my aunt’s birthday with champagne and cupcakes. It certainly was a treat and one that I would repeat, though maybe not for a while! I love travelling. I always find that it makes me think about what I have at home and what I might take for granted, and so it encourages me to be happier in life. Does anyone else get that? 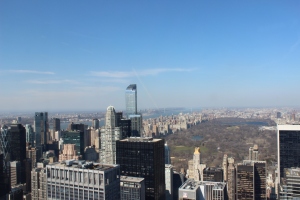 A shot of Central Park taken from the Top of the Rock in New York!

There will be some more pictures to follow this blog post but I’m still trying to catch up with everything!

A few days after I got back I received my copy of Undead Legacy through the post! That’s right, the zombie anthology in which my short story Dealing in Death is featured, came to my door. I have my very own copy and let me tell you, it not only looks cool but it feels cool! I cannot wait to read through all the fantastic stories in this anthology!

I’m back at work now and you know something, I think it has to be the first time I’ve gone back to work after a holiday and not been dreading it. I am so lucky to have such an amazing job. Do any of you feel like that? What would be your perfect job?

The other very exciting thing is that I’ve hit the huge milestone of 1000 likes on Facebook! It’s a huge achievement for me to know that that many people are following and interesting in my work. So much of an achievement in fact that I’m running a little giveaway… check it out on my facebook page: http://facebook.com/alice.j.black.doors

Until next time, folks!